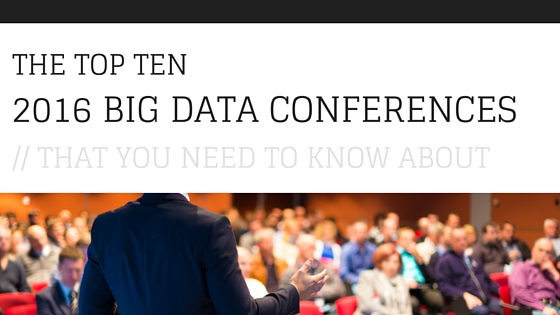 Because technology changes almost daily, keeping your data science skills polished will keep you a step ahead of the rest.

Here are 10 data analytics conferences / summits / forums that we think will be helpful to you as you and your organization dive into 2016. We’ve included the hashtags of these conferences so even if you can’t make it, you’ll be able to follow along on social media for those golden nuggets of data wisdom. Enjoy!

As we’re headed toward 2017, check out our list of data analytics conferences for the remainder of 2016. Speakers: eBay, Boeing, US Dept of Commerce, Groupon and GE UPDATE: Check out our latest post for more great data analytics conferences in 2016

Interested in how SmartBase does Data Analytics? Sign up to see our Analytic Portal Demo for insights in action.

Carolyn is the Marketing Manager for SmartBase Solutions. She is passionate about Social Media, live-tweeting and her morning coffee. Outside of work, she enjoys volunteering, playing with her Bengal cats and trying to complete crossword puzzles.

Hi Caroline
Do you have a list of the Analytics Summits for Healthcare?
There are so many its hard to know which the good ones are.
Thanks for posting this one.

UPDATE: Here is the second half of the
list of big data conferences for the rest of 2016
Hi Miguel!
Thanks for your interest in our list of Analytics Conferences. I’m in the middle of updating this list with conferences for the rest of the year, so I’ll be sure to include some Healthcare specific analytic events. You’re right – there are so many, it’s hard to know which ones are most valuable. Since we work with many healthcare organizations, SmartBase will be returning to the Healthcare Marketing and Physicians Strategies Summit in Chicago at the end of May. We’ve attended the last several years and found it to be a great event. Check it out and let us know if you’ll be there!

Can you share about any conference in the Analytics/ Enterprise Reporting space in Aug/Sept 2016?
Ben