“We hear you.” Apple, Taylor Swift and Customer Loyalty 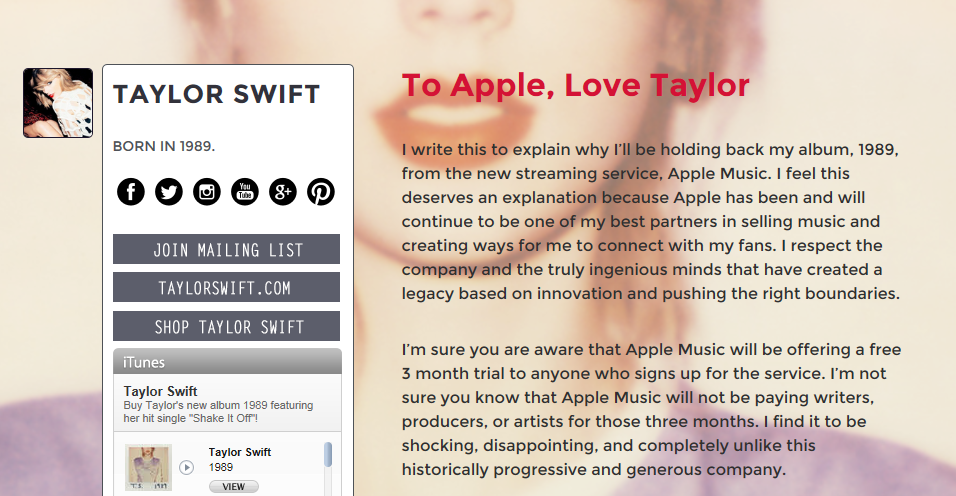 “We hear you.” Apple, Taylor Swift and Customer Loyalty

I won’t give you the entire backstory between Apple and Taylor Swift. You can read that here. I’ll just refer to the bones of the story.

Taylor Swift didn’t agree with a decision made by Apple and she did what a lot of people do: She shared her thoughts about it with her followers on social media.

On Sunday morning she wrote a letter to Apple on Tumblr, a popular blogging social network, and it was ‘hearted’ by 70k+ of her extremely loyal fans. It was also picked up by several news sites you may have heard of, like the NY Times, Forbes, and Fortune.

As an influencer with millions of fans all over the world that are waiting intently to hear/see what she is saying and doing next, it’s obviously advisable to listen when Taylor has a gripe. Especially because Taylor is known for using her influencer power to speak for those whose voices aren’t often heard. Not everyone has Taylor’s status, but companies should treat each of their customers as if they were Taylor-sized influencers. And I’m going to tell you why.

Are you listening?
Now a disheartening statistic brought to you by Sprout Social: 5 out of every 6 attempts to interact with a brand on social media go unanswered. Knock, knock? No one’s there.

Locowise, a social analytics firm, did a study of response for 900 brands on Facebook. They found only half of brands allow their followers to post on their Facebook wall. Today, this is like selling a product but not publicly publishing your company’s phone number.

From that same study, “65 percent of pages that enable users to post to their Timelines did not respond to a single post, meaning that nearly 4,000 posts were ignored”.

In a time where people expect a response from a brand on social in less than an hour, not responding is how brands will be left behind.

How would customer loyalty improve for these brands if they simply responded? The answer is GREATLY. And it’s not just about customer loyalty. Listening for feedback and responding can help improve the customer experience,  your product, and your support process. The key to social responding is utilizing, adding or allocating human resources to execute the strategy.

Bottom line: Every customer should be given a voice and that voice should be heard and acted upon. Doing this will actively demonstrate your commitment to each of your customers.

The end of the story? Apple responded to Taylor.
Execs called her privately to have a discussion about their decision. Apple publicly explained (on Twitter and every news site that picked up the story) that they were changing their original policy due to the feedback that Taylor had given them.

Then Taylor tweeted this to her 59.2 Million followers:

In true T-Swift fashion, she states “They listened to us” – referring to her whole fan base. Click to see their response to this Tweet.

Conclusion: Give people a platform to publicly interact with your brand. Respond to your fans/followers/customers/prospects in a way that will delight and surprise them. Give them a Taylor-status experience and they just might tell millions of their closest friends.

Apple Inc. said Sunday it will pay independent labels and artists for music on its new Apple Music streaming service during its three-month free trial period, reversing its earlier policy in the face of criticism from Swift and others.