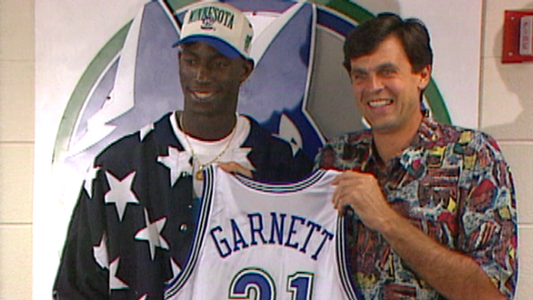 If you’re Minnesotan and not living under a rock, you probably already know that Kevin Garnett has returned to the Timberwolves after his 8 year hiatus from MN basketball.

From the day KG signed with the Timberwolves in 1995 (check out those shirts! ^^ [Photo credit: KSTP.com]), Minnesotans have been collecting Garnett stories from run-ins with the always friendly and mostly goofy power forward.

In honor of his return to the Timberwolves and his first game back tonight against the Washington Wizards, we’d like to share a few of our own “KG stories” from SmartBase employees.

“One night, I was taking the family out to dinner at Manny’s Steakhouse. Kevin Garnett walked in with a group of his friends to have dinner. This was back in KG’s early years with the Timberwolves, so he and his friends were pretty young and having a good time. One of my family members asked Kevin for an autograph. He was so friendly and nice, he said yes right away and signed a napkin. When we looked at the napkin, it said ‘Stay Sweat, Kevin Garnett’. Okay, so he might not have been the best speller, but it did turn into one of the best stories!” – Gregg Kloke, COO

“I was at the mall shopping and I ran into Kevin Garnett with a few of his friends. He was pretty hard to miss, not just because he is 6’11” (almost a foot and a half taller than I am), but because he had a lot of shopping bags in tow. In passing, I said ‘Looks like you’ve been busy’ in reference to his purchases and he laughed and said that he had. He asked me my name and I told him. Then he said the next time he was in town, he’d take me shopping. It was a fun moment, but the best part of my KG story happened as I was heading to my truck. I’ve always driven large trucks, which might seem counterintuitive to some because of my petite size. As I was about to get into my truck, I heard someone yell my name. I turned around and it was KG. He yelled ‘Nice truck!’ My day was officially made.” – Rebecca Ramsden, Interactive Marketing Director